This is the letter that started the entire “Rotten” series in QST, written by “The Old Man” himself, not other than Hiram Percy Maxim. 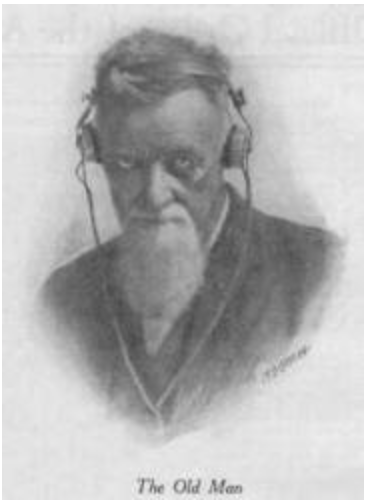 This QRM business is getting my Nanny. Here it is midnight, and this msg. from a fellow whose girl has not had a letter from him for a full twenty-four hours, is still stalled. I have smoked myself into a state of funk, the floor is covered with burnt matches, I am losing a perfectly good temper, and there is no sign that this will not continue all night long. How long do these radio bugs sit up at night any way? Right now, as I write, there is that old gink 2AGJ up in New York State fluttering along with that bird –in-the-cage spark of his, 8YO is yelling his darned head off for somebody over on the Pacific Coast, apparently, 8NH is still trying her best to be ladylike in spite of a full hour of trouble, old 8AEZ is booming out QSA but QRM bad CUL, 9PC is trying to do something to 5BV, I distinctly heard 4DI say a bad word, and to the best of my knowledge and belief, no one has got anywhere.

What are we going to do about this business? It used to be that we were perfectly satisfied to listen to SLI and once in a while on Saturday night when we could stay up late, we would listen to Arlington send time. When heard some commercial say QRM, we had to look it up on the chart to see what it meant. Later, we began talking to the fellow over on the other side of town and then was born amateur QRM. Sometimes, the “little boy with the spark coil,” (the latter is all right, but dog gone the hide of the former) would try to call us at the same time, and we used to think we were in trouble. Still later we used to think we were bothered when we were in the middle of a “conversation” with a fellow in the next town, and some whop would butt in. It about this era that we began to organize Radio Clubs, with high faluting ambitions about “promoting radio communications and controlling interference.”

But when we have a fellow who has not written to his girl for a full twenty-four hours, and who positively must get the msg. to her over in Illinois, it becomes a serious matter to have some one else getting gay with the ether, especially when the later had no conception of the existence of the word “brevity.” One thing I will say, and that is that good old 8AEZ is brief. His spark may drown out every-body in the western hemisphere when he sends, but he is brief. He says what he has to say in a few words in a few signals and he stops. He also does not go in for the long technical discussions about gap speed and condenser construction while forty or fifty others of us are waiting with five or six messages each, many of which have been stuck on the pin a week. Far be it from even me, a real blown-in-the-bottle radio grouch, to find any fault or mention any names, but some of the young gentleman who burn up my valuable time every night and thereby multiply this QRM business, ought to look up in the dictionary the definition of that particular combination of letter indicated by B-R-I-E-F. I could call off a dozen of them right now, and I would if I thought that Editor down east would print them.

The trouble is, the young squirts don’t stop to think. They start out and call somebody somewhere every three minutes. Everybody they hear, they immediately call. If they don’t hear anybody, they send a QST something like this: — QST QST QST QST QST QST QST de 1NUT 1NUT 1NUT 1NUT 1NUT 1NUT 1NUT 1NUT 1NUT. Any station more than fifty miles distant hearing these sigs. please send postal to Willie le Nut, Nutville. Willie repeats each of this msg. three times. Each letter is sent so slowly it puts you to sleep. He uses up just exactly twelve valuable minutes sending out this hogwash, and drives an old timer to the point where he radiates brush discharge from every hair on his head. These fellows ought to be limited to hours between supper time and 8:30, and any one of them slopping over ought to get a letter from every respectable amateur within his range threatening to spank him if he ever transgresses again. I know a certain some one who will put in his bid for election to the office of Chairman of the Committee on Chastisement.

Here begins ten minutes of the darndest scratching, screeching, groaning, blowing off steam, blubbering that ever mortal ear heard. At its worst it goes on into — — fine fine how do u do it? ark r r r rubber band on  vibrator—BANG. My friend with the one k.w. over on the other side of town explodes. He calls an 8 station. When finishes, the scratching reduces. Then we get the long distance QRM again. Cul om sk spfscity bunk allemo bish mela hash breakfast wunkey wunkey lala lala 2asj arm bad qsl 3zw must go to bed now hw hw hw abt abt abt msg msg msg pse pse pse k k k. This is the way my log book this evening looks. It’s enough to raise a blister on a wooden leg.

Listen to this:– Yes yes jst wyd glucky wait a mt muddy wouff hong bliftsfy monkey motor. We assume from this msg that Glucky is being asked to wait a minute while Blifsky seeks a wouff hong with which to wallop a monkey the next time the latter faces toward the motor. I do not think I know just exactly what a wouff hong is. Probably some piece of apparatus used in the southern states to beat monkeys with.

It is this form of uninteresting “conversation” which clutters up the air with QRM. Of what moment is it to the rest of the world that this fellow Blifsky is going to smear somebody’s monkey with a wouff hong? When anybody relapses into such mental slop as to want to operate with a thing named a “wouff hong”, he ought to keep his trouble to himself and not compel all of us respectable amateurs to listen to his drool.  To slaves and slobber a lot of foolish twaddle like this when that poor girl out in Illinois has not had a letter since yesterday, is plain wicked.

Sorry om qrm qrm 9vy few words schlipsh nuzzle his mucket faded undershirt cfrish reptg pain in neck sus gup om cul ark. This is a real relay, evidently. 9VY over in Fort Wayne is mixed up in it in some way. Whose undershirt they are talking about and what schlipshing one over is, I do not know exactly, although I have a rough idea. Whether the signals faded or the undershirt faded, or what was the matter with the sus gup of the neck of the undershirt, I be darned if I know.

Just cast a lingering look at this:– Biirgrmp bru rotary ge ge ugerumf om with my set rettysnitch spitty tone hit in potimus? Now what do you suppose the poor gink was trying to say when unreeled that? You have to guess a lot in wireless, and how would you guess this? Something is wrong with this fellow’s biirgrmph, his rotary also has a bad case of ugerumf and somebody around the place must have spit on his rettysnitch, because his tone was so rotten it hit him on his potimus. Sound bad to me. Why will some people send such personal matter by wireless when the whole country can overhear it. It isn’t decent, and it makes the QRM more rotten than ever, and just think of the way it makes a perfectly good log book appear.

What we ought to do is organize an Anti QRM Association. Then let us elect for Chairman the worst plug-ugly we can find in these U.S.A. Then let us chip in for a little money and hire a clerk with a bad disposition who will write letters threatening the life of everybody whom the members report as causing needless QRM. If anybody gets balky, we will all join together and swear the gink is sending with a decrement greater than two-tenths, and so report to the local Radio Inspector. If the latter does not within twenty-four hours have the boy arrested and sentenced to life imprisonment, we will all band together and find another job for said Radio Inspector. Let us rise, fellow bugs. Rise and crush this octopus which is engulfing and overwhelming us. Eight hours a day and triple time for overtime is death and starvation to our families. Hash for breakfast, rotten smelling fish, and QRM — — — We will have naught of it. Down with the fellow with the scratchy spark coil, down with the fellow who calls three times three, down with the fellow who calls everybody he hears and down down down with that unspeakable skunk who calls somebody and sends a long relay message repeating each word three times when the station to which he is sending is sending something himself.

There by heck, I have that off my chest. Now you there in Illinois, get this call. Let everybody else stand back from now on. I’m tired and sleepy and cross, and I don’t care who I QRM until I get that pin cleared off.