I’ve done some work in researching the Gross Radio company, and have also worked with a friend to reproduce the labels which Gross applied to their coil sets, please see the “Gross Label” button on the left menu.

I’d be interested in any and all info on the Gross company, unfortunately, time seems to have erased a great deal. The best sources which I have found have been Raymond Moore’s excellent book “Transmitters 1930-1980”, as well as older QST magazines. So if you have an advertisement, manuals, or even Gross equipment, I’d be delighted to hear from you. I would of course be happy to pay any copying costs as needed.

For the benefits of other Gross aficionados, and those interested in early radio history, I’ve included what information I have on hand, as well as information that others have been enough to share with me, on this site. Please check the menu to the left for other options.

Radio Back In The Day
The time was the 1930s, and America, like much of the world, was mired in the midst of the Great Depression. Jobs were gone, bread lines were common, and times were admittedly hard. Yet, to borrow a phrase from Dickens’s, “It was the best of times, it was the worse of times.” for the darkest days for our country were the beginning of the Golden Days of radio. Americans needed distractions from the cares of the day, and radio had captured the American imagination like no other invention before. One could now “listen in” to the world, bringing news from around the globe into the living room each evening.

These were the halcyon days for the radio amateur as well, with radio stores popping up in small cities and towns, offering knowledge, parts and supplies to the budding home brewer. It was American ingenuity at its best, with whiskey shot glasses becoming insulators for the tuning capacitor, wooden breadboards and kitchen cake pans becoming the chassis for the latest receiver or transmitter creation, and tinfoil and plate glass becoming transmitting capacitors.

With funds limited, the time honored tradition of home brewing or building your own set, was the word of the day. Those who bought “commercial jobs”, or assembled sets, were often looked upon with disdain, perhaps even with a tad of envy and for breaking tradition by the more experienced of the amateur community. Although fone modulation was used, CW was still the dominant mode, as it was simpler to build, therefore less expensive to the cash strapped amateur. Vacuum tubes were costly, and therefore most sets consisted of simple oscillators with one stage of gain, MOPAs, Hartleys, TPTG were the rule of the day. 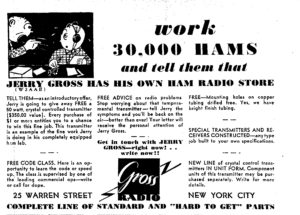 Gross Radio Company
In late 1931 into this mix entered a new radio firm, the Gross Radio Company. Originally located at 25 Warren Street, and later at 51 Vessey Street in New York City, Gross Radio was founded by Jerry Gross W2AAE, after he left Leed’s Radio. Gross had worked at Leed’s designing radio kits, right down the street, in the area which later came to be known as “Radio Row”. During the 1930s, Gross Radio thrived, and ads could be found in a number of radio publications, including QST and Short Wave Craft, offering a variety of kits and assembled units. In fact the monthly QST ads were often ¾ or even full page, on the level of much larger companies like National and Leeds.

As these were the days of the Great Depression, many amateurs lacked the funds even to buy a radio kit, much less an assembled unit. So, aside from Gross transmitters and receivers, the company also sold radio parts and products manufactured by other radio firms. In one QST ad, the header began with “If We Don’t Carry It In Stock, We’ll Get It For You.” Gross also offered custom building for the discerning client, proudly advertising that “Our lab is equipped to build anything to your own specifications.” A Wednesday “Code Class” was even offered in the store from 6:30 to 7:30PM, with the advice to “bring your own phones.”.

Perhaps because of his parts sales business, Jerry was surprisingly tolerant of window shoppers and tire kickers, and “Jerry’s Place”, as the store came to be know, grew to become quite the gathering place for hams. Bill Orr W6SAI, writing in the February 1977 issue of CQ magazine, had this to say about his visits to Gross Radio as a young ham, “most amateurs spent their time in Jerry’s store examining the model transmitter carefully set atop a counter, and copying its circuit so they build the equipment out of scrap parts salvaged from a defunct broadcast receiver!’

The Gross receivers took their names from the avian kingdom, with names like the “Hawk”, advertised at “$22 net”, and the “Eagle” a three tube regen comparable to the National SW-3, for $11.95. These sets, along with the Gross transmitters, were advertised in the back of QST for a number of years, no doubt inspiring the young ham to deliver many a newspaper, or mow many a lawn in order to spring for a new set. The Gross sets were unashamedly simple for the day, far eclipsed by contemporary offerings of National and Hammurlund, yet they were affordable for the beginning radio amateur, an important consideration of that era.